Posted by Harmony Holiday at 5:18 PM

In the tradition of great black queens Dressing up in Uniform

Posted by Harmony Holiday at 7:40 AM 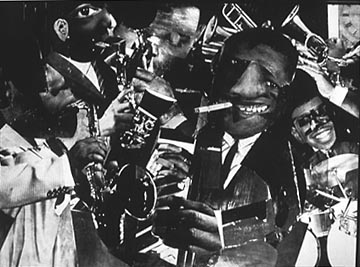 Posted by Harmony Holiday at 5:07 AM

Rock the Party, Fuck the Smackdown,

'cause when the morning breaks I'ma get my sound back
and all my native weather will be mine.

Urgent Messages for Those Who Would be Real

Hess Runs the Voodoo Down 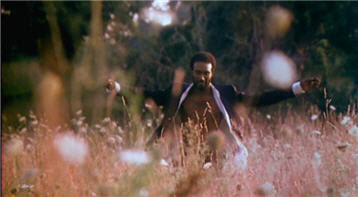 Color him father/(In the) Amen Break

I. Tattooing my simplicity on the pitiable

In this first line of a pledge to new forms I ask, was I not a very successful child? No, actually, the quest goes, I was not a very successful child, the axe halts mid-air, the grind of almost is where I like to go, and stay. Car chase scene. I was twirling, you thought I was running for runway child. The pageant of...you're high all the time, way up in the quicksand castle. I'm better at it now. Now I believe in the invisible and ask every man I meet, show me your myths, and the eligible ones look into me like I'm mirror I grow younger and younger

A musician could make an amen track in the morning... and have it in the fast commercial by that same afternoon. The commercial would be for urban living, eating slurs from the journey's register. Selling blackness back to her as self-abnegation, how well its furtive medicine assimilates to commercials. Mercilessly convincing the hits to look honest with suburban eyes, to captivate, but not like captors, my captains for bright mornings. The others have dropped their oars welcoming whatever violence their tribute commands. It's difficult to be the oldest/ youngest mission on the planet, so we gather with our hands in mid-air and plan the silent doves of our lips as they unload us face first onto the rickety plank of entertainment. It's not so bad. The successful child will tell us if we seem fake or too real

Any open drum they could find went with Fine and Mellow behind the soap commercial, but when he starts in to love me it is so...The virility scene, the slogan kept going: Wouldn't it be interesting to be two kings at the same time, not the one soul of them both, but two distinct kingly souls...
Posted by Harmony Holiday at 9:37 PM

Untitled from BWR on Vimeo.

Negro, this goes out to chaos

Get out the car, come join the party
Restore us to our natural state of danger
That strong fanatic wind that never ceases to blow
She is a rose, she is together like a wind tunnel and they test their struts inside her
And their torched opinions make some grotesque spectacle on the terrace

Today I went into the hills
To make the get-out pleasure last as long as possible
This is how it used to be
Posted by Harmony Holiday at 8:14 PM

Posted by Harmony Holiday at 3:10 AM

Commercial for after the end of the world

Posted by Harmony Holiday at 3:55 AM

For these steel days. Since it was all commercials, we won't pay. Some chameleon miracle glimpses itself growing out of a risk and what patrol slid out of sight like a parrot's eyes stiffen to expose your silences back to you and the grind between stations gets loose and timorous and dealing with the myth that men are angels brought a dent in the friction where I'm coiled, hidden, stricken by the calm of re-appropriated ignorance. It brought about the end of opinions. Their ghosts rejoiced for us and them is us again.

Posted by Harmony Holiday at 2:28 AM

News on the Hour

No Lone Ranger
No Green Hornet and Cato
No Ma Bowes with his bell
No Audubon
No, the Audubon is the wanderer
No wonder the word is commerce, the calm mercenary went there, where
A perfectly good coma interrupted by nightmares clones a dream
Posted by Harmony Holiday at 11:32 PM

Just Beautiful. Everybody was Great.

Posted by Harmony Holiday at 12:53 AM

As though the new maximum

is something about realism, he jingled softly about his not not self in a thicket of cross-promotion he jabbed

The Zombies are here and their kiss is deathly.
They are ruining
jazz
spots from coast to coast. As soon as they start hanging
around
certain
clubs, the decent citizenry
avoid the spots like the plague.
They come
with their zoot suits, long haircuts,
reefers and "zombie"
jive to night
spots that feature
top jazz talent. Soon they become the atmosphere

Posted by Harmony Holiday at 7:21 PM


I want to take your hands from my hips and place them on a statue's hips. Call you Ransom Lewis. Lift the dewy crane of metamorphosis from its slum near the alphabet. Am I an open window yet? Broken where the repair swung in. They're not exactly perfect. They're not perfect. My muscles of folded jade. Jade in tidy supple bows. Jaded violin of so-what/Let the heir in. I stand on my toes and they burn and scoot and numb with use. Do dances to the muting tantrum. Be the hip frail damsel. Stretch and rip and go up in burning buildings. Come out done talking about survival. Come out prepared to have not come out. Mouthing It is with such intense joy. We spoke in moans of the colonization of 'swing.' Of the wingedness of the statue's hips I-by-you-put-on

Posted by Harmony Holiday at 4:54 PM

You wonder how to play without a bridge, how to navigate what is no longer song but what carries song, bone deep in the deep of bones, ghost-ship rises sunken ark of bones, out and cut of the (radically excluded middle) passage. You've got to move from the extended interruption of the unbridged, the chance of the synaesthetic and what it marks and unmarks in the cut, what it leaves and opens to the senses like a subject broken and abundant in some kitchen, field, or studio of representation, of securing and capturing:

This is my traffic over the night

but you won't get the mask

oh touch the lute
Posted by Harmony Holiday at 12:13 AM

Rudiments of rapture. Great sensitivity to open doors. Loud talk. Liquid speak. Muses. You follow the same paths as before. Only they appear strewn with roses

Posted by Harmony Holiday at 2:32 PM

Both Yards: A Jungle

The martyrs have harmed truth

Both Yards: A greeting / lied too/ Hello meant, don't be new or double, oh hell no

the number one is skill so rude and wild I come from the prize for vacant rope climbing ripple/ the dealer/ numeral/ broke deck: Too many people standing there with tilted glasses and paper fans giving for grace, after a party answers fell together through a wobbling plank of atmosphere, woke up more reckless, thankless, alive with the tangle of transposed variation,

Sunny: yesterday
Sunny: one so true
Sunny: thank you
Sunny: you gave to me

Drew my face in the seed

Posted by Harmony Holiday at 11:33 PM

You got a friend in me. A real friend and if.

Posted by Harmony Holiday at 5:22 PM